I built 3 hive traps for WSU's hives, and Dr. Chris Looney picked them up, and as I now understand, they have been installed in strategic locations near where recent sightings and captures of the AGH have occurred, generally in the Custer area, west of Bellingham. They are part of a multi-prong attempt to bait at least one live worker specimen of the AGH before winter closes in. Last year's single known hive attack, at Ted McFall's hive, happened in November. Which to me seems late for an insect to still be feeding larva, and hoping to make reproductive- including actual mating during our wettest and windiest month- but apparently this insect like's it this way. Reminds it of Hokkaido.

I volunteered to make this small batch of traps, as.Dr Looney asked for them, to augment other scent and pheromone based bottle traps the state is experimenting with.  This trap, of course, does right on a hive, and uses the best bait of all- an actual bee colony. It's based on trap designs tried and true- dating back to the 50s (I think) in Japan. However, it still hasn't trapped a single AGH- so  still awaits a claim to legitimacy. If the hornet proves to not be a threat, and to not have survived, or is destroyed- then I am planning on preparing plans to convert these to bird feeders.

Below is the morning of completion-with three traps laid out. I think that makes 20 or so that I have built, and another 5 or so prototypes. I timed myself on this last round, and I believe it took 45 minutes per trap. That's going without stopping- and having everything laid out, but not cut. I have a system now- written out, should anyone in the future think they need to build more than one trap at a time- I'd be glad to send it.

This is one of my apple trees- a Gala- and my old F150 truck and long term companion of 25 years, bought when I thought it was a "big" truck- but it could pretty much fit in the bed of any of my neighbor's trucks these days. Great for hauling hives and equipment. 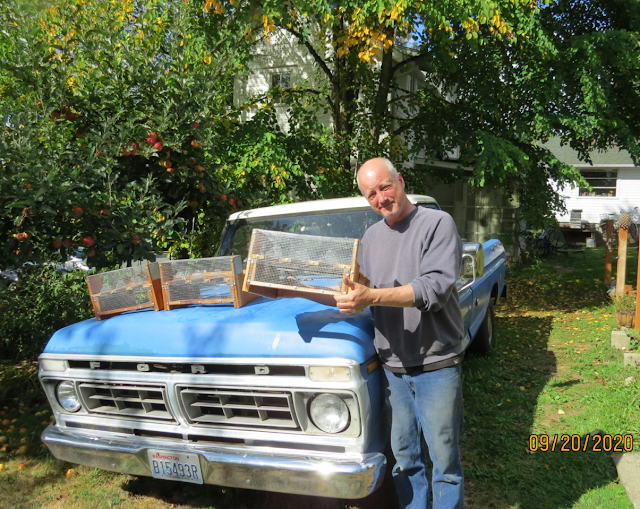