The best paper I've found on the biology of the Giant Hornet and trapping methods, was published in 1973 by two Japanese entomologists, Makoto Matsuura and Soichi Sakagami from Hokkaido University. It's called A Bionomic Sketch of the Giant Hornet, Vespa mandarina, a Serious Pest for Japanese Agriculture.

It can be read here- and is highly recommended.

Part 7 of the paper discusses controls, and section 7.2 discussed trapping at the hive entrance. Even though hives can be screened with meshes or lattices to allow free honeybee movement, and prevent hornet entrance, the Japanese discovered that this in itself wasn't enough. The hornets eventually learned to just hang outside the enclosure, and kill them as they exited. This was also a problem if the bees exited the hives to attack the hornets.

The initial design of the trap dates back before 1950, but was later improved Mr. S. Miki, and improved again in 1965.

The earlier design is drawn like the below. It feature a full bottom (9), a skylight (3), a cone trap (5), and a lower entry (4). It was found that bees would attack the hornets in this trap, and could see them when they were trapped, so wouldn't stop. 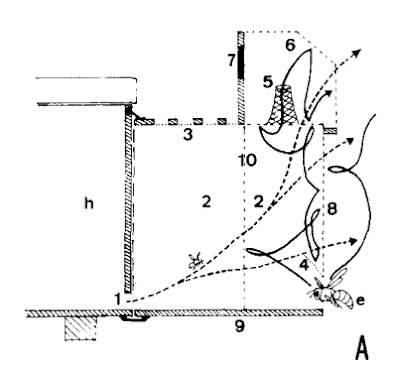 The improved trap removed the bottom entirely, and had a solid mesh front (discussed below), hid trapped hornets from sight from the guard bees, installed a "stop" (4) to prevent hornets fleeing from leaving out the bottom, simplified the skylight, and increase the length of the trap. 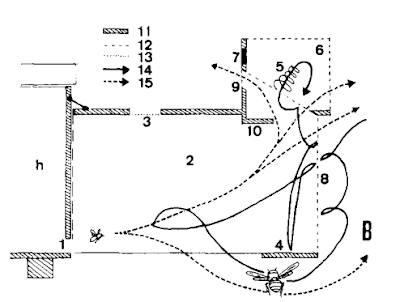 Below is a cartoon I made that illustrates how the trap is intended to work. The idea is to use the hornet's behavior patterns when challenged to trap it.

At first, a scout hornet arrives, and searches for a way in. Bees are exiting the bottom, and it finds this route, and goes below and up into the lower body of the trap. It approaches and tests the entry- and is challenged. When challenged- and this is key- the hornet backs off, and up, not down, and so comes back to the screen. If it then drops down to exit, it is stopped by the bottom rail. Seeing light above, it then goes upward, and tries to exit through the cone (in this case a coil), and enters the actual trap, which it is unable to leave.

This is more or less, how the more modern traps work and are built. However, most of them have a partial lower entry- and so I included that in my design. The drawing shows a "coil"- which Matsuura recommended, but most traps seem to just use mesh. You'll see in the examples lots of options for the actual cone trap.

I am thinking that if hornets do get trapped in the cage, that in my trap they won't be visible from below. However, if that proves to not be the case, then a simple screen, could be attached to the front top piece.