These are examples of modern Japanese traps I was able to find on the internet. Usually it is these, or variations of them, that appear in the Japanese videos. They are called "Giant Sparrow Bee Traps"- and not "Murder Hornet Traps",  as one might expect.

All of them are based on the trap designs discussed in Mastuura  et al's  paper, and have apparently been used since the 1950s. in one form or another. The commercial ones appear to be beautifully built, out of cypress maybe, and all the mesh edges are neatly covered with metal edging.

All of the first four traps are from a Japanese vendor Furusawa Housan, who have a website with a number of unusual pieces of equipment.

The first  trap shown below is often seen- and has a few features common to all. You can see a small skylight behind the trap body, and there is a short entry at the front, with a bottom rail. This is sort of a hybrid of the traps that Matsuura discussed.

Also note the double height trap- two coils below, and a single one above. I am totally unclear as to why this would be preferable. Hornet overflow? I also note that it's off center- and doesn't span the full width of the hive for some reason.


This is the one story version- and is the one I most closely tried to copy. I was able to use the dimensions shown to derive other dimensions. Note that there are only two coils. I am not sure if that is for economy, or just that there is less room. 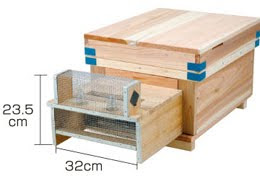 This is not a trap- but a prevention guard. It's like (a friend informs me) a drone trap- and workers can fly through it. It appears to made in the way a queen excluder is. In Matsuura's paper, he says that V. mandarinia can't get through a 7 mm hole- so that' the space between slats one would need. I hope to draw this up- maybe using welding rods for the slats? 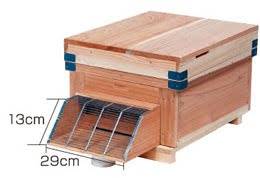 A very common solution are sticky boards- which I think in Japan are actually for rodents. They all look like the image below- and are incredibly sticky. You see them in lots of videos, sometimes in conjunction with the Giant Sparrow Bee Trap. I don't know why a ton of honey bees wouldn't also get stuck- but it might be worth looking into. 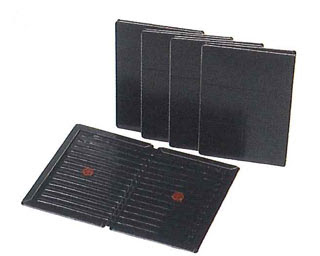 A nice variant- using horizontal bars, and a mesh cone. I don't quite understand what is happening in the interior- it looks like a second wall? 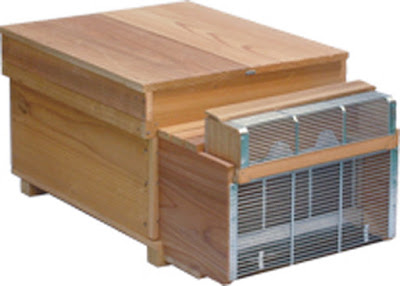 This seems to me to be more of a budget design. It uses something like screen door mesh for the cone traps. One interesting aspect of the design is the angle of the front, and lack of a bottom rail. It makes sense that this might be a smart feature- the hornets ricocheting upward, in a sense. 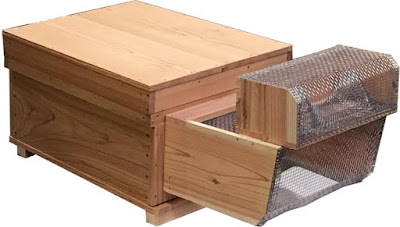 
Someone who didn't have a holesaw- and similar mesh cones. Sort of like wolf spider traps. I don't know why all these traps have the cage above narrow than the body below- I just ignored that. 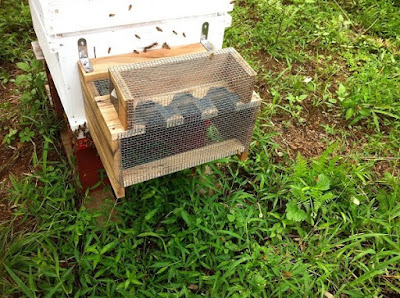 A cute variation that seems to be homemade. One trap hole, small, and uses a frame bar. 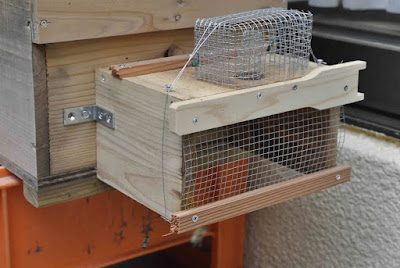 Close view of the double deck variety, with a dead hornet. These are coils of wire- another alternative for the mesh traps. Why there are two at the first level, then only one- I have no idea. 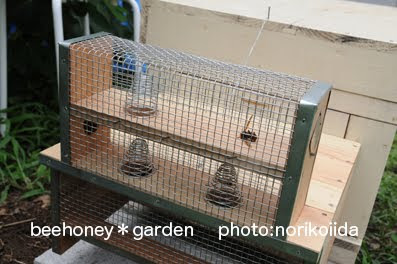 Here is a variation that seems to be mass produced. Small, single coiled, and using what appears to be plastic mesh. 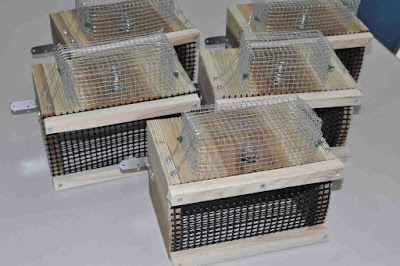 And lastly, these furniture-like versions, or maybe small bull-dogs?- with quite large cages on top, and legs. Also- sticky boards above with plenty of dead hornets. Apparently, its common to use both together- it appears in a number of videos. 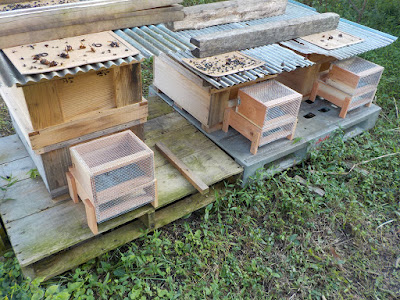